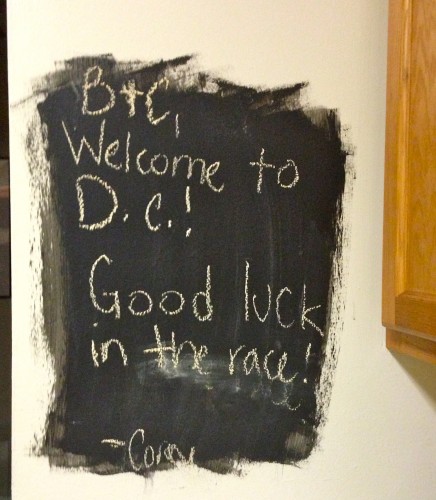 Brian and I arrived into the city on Friday night and were lucky enough to stay with his sister! We ate dinner at ten and pretty much called it a night after that. Saturday we went to brunch then spent the rest of the day at the race expo and walking around the national mall. The weather was gorgeous but the walking not so much. I haven’t been to DC since I was in 6th grade so I felt like I had a lot of catching up to do. It seemed like a lot more fun this time around for sure. I don’t know what I would have done if Brian wasn’t able to come with me!!

The Nike Women’s Half Marathon was no doubt the greatest half I’ve participated in so far. It was so fun and full of cause and encouragement. The course was flat and beautiful through the streets of D.C.!  Everyone was so alive and energetic and supportive. I have never experienced anything like it. I was so encouraged by spectators for almost the entire course. They handed out Clif Energy Bloks, Luna bars, Nuun, and water along the course. ( I didn’t actually eat/drink anything the entire run because I felt the stomach problem coming on)

Going to the race expo makes me feel like a kid walking into a toy store. I was smiling ear to ear the entire time! I don’t know why I love it so much but seriously every time I go to a race expo I get like this! This expo was great and a little overwhelming. There were so many people and so much to look at. It was a good overwhelming! I think Brian thought I was really weird…

Mile 1-8 felt great. I started out strong and was consistent with my goal pace of 8:25. I was hitting my times well and felt very confident. Right at mile 9 my stomach started to hurt and I HAD to go to the bathroom. I thought I could tough it out and finish the race strong and according to plan but I just couldn’t – it wouldn’t have been pretty at all. At mile 10 I had to stop for the bathroom.

I’ve always dreaded having to do this especially when I plan on running a race a certain way. It put me back about 2.50 minutes and threw off my pace.  At this point I think at this point I was starting to become mentally defeated… I wanted to run my last 3 miles hard but  after the bathroom break I started falling away from my pace and my mind started to overcome me.

When I finished the race I was really upset about this because I felt like I could have done better but my body had a different plan.

I think I learned a lot from this race and about training. Overall I feel like I ran well. Everything was working right except for that bathroom break. I know it isn’t the end of the world and that I can continue to get grow in my training and running.  I think that racing teaches me how far I can push my body and how mental running is. I wish I could say I gave it 100% but I feel like I could have pushed harder. I think this race re-confirmed my love for running and my desire to continue to get better!

Finishing the race felt great not only because I was done, but because men in tuxedos immediately approached me with a tray of little blue boxes! It was really neat to finish a race, get a Tiffany necklace, grab some snacks, get my new t-shirt and see Brian. I LOVE the racing environment!

The weekend was so great! Brian and I hadn’t seen each other for 7 weeks before this weekend so it was nice to explore DC with him and have him here to see me run! Another plus was that I received my first piece of Jewelry from Tiffany & Co. I LOVE the necklace! They did such a great job on it and I will be proud to wear it!

( yes… I am standing a stair higher… short problems)

My roommate ran her first half marathon this weekend and did AWESOME! So thankful that Brian and Andrew were there to cheer us on!

We ended this amazing weekend with PRO Compression socks, cupcakes, and the perfect cup of coffee!

Even though I didn’t run the perfect race I had planned I realized that it is such a blessing to be able to run and to be able to finish the race. I begin to realize that it isn’t always about a PR or a great race but about the fact that I even have the ability to run. I appreciate this now more than ever as I think about all of the runners at the Boston Marathon. It was so amazing to see so many people at the race supporting and running for Boston! I am thankful for this race and for all the runners there!

Who else raced this weekend? Tell me about it! 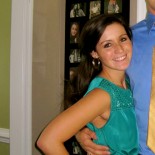 Hello! I am a blogger that loves the Lord, running, healthy eating, and many other things! I am married to the most amazing, caring and fit man that loves the Lord! I blog to share my beliefs, fun running tips, and everyday life with the world! I hope that you enjoy!